Sleep is an essential human need, which makes sleep disorders detrimental to our overall health and wellbeing, a plight with sweeping implications in our daily lives. And that plight is much more prevalent than one might think: reportedly, roughly 1 in 3 UK adults struggle to fall asleep on a weekly basis, and 1 in 5 experience this problem on a “nightly” basis.

Sleep medications have long been the go-to solution, but like many traditional prescription drugs, not only are they a temporary solution to a permanent problem with increasingly diminishing returns, but worse, a solution that can even mutate into a problem in itself, such as addiction and a constant, thick mental fog.

CBD is thought to help to be giving a lot of traditional medications a run for their money, some say it is thought to be a safer, more natural and gentler alternative.

And when it comes to insomnia and sleep disorders in particular, tracing them back to their common root causes could lead you to CBD as a way of helping.

There are three main causes of sleep disorders: stress and anxiety, acute and/or chronic pain, and disturbed sleep cycles that make it difficult to stay asleep and tap into the stages of the most restful sleep.

CBD has so far proven to be highly effective on all three fronts. An unequivocal testament to that is the fact that it has taken the fighting world by storm, with so many fighters hailing the compound as a godsend that helps them ease the physical pain and migraines, find respite from the dread of an upcoming fight, and recover, which is simply impossible without quality, good night’s sleep.

How CBD Produces Its Effects on Us

CBD interacts with us through the endocannabinoid system (ECS), which is a communication network of neurotransmitters and receptors that permeates our entire bodies and regulates some of the most essential, interconnected processes that drive our thoughts, moods, and physiology, including our circadian rhythm. Its primary function boils down to maintaining our inner balance and harmony, a.k.a. homeostasis, even when factors in the external environment, like stress, for example, disrupt it.

When we say balance and harmony, we don’t mean some vague, philosophical concept, even though the mindset is a pillar of holistic wellness – homeostasis is a state of stability on a cellular and physiological level.

CBD for Anxiety and Stress

CBD’s anxiolytic activity is one of the cannabinoid’s signature traits, suggested by a large body of anecdotal evidence and confirmed by proper studies.

Scientific research, while still relatively scarce because of the cannabinoid field’s infancy, has established CBD’s ability to significantly and consistently alleviate anxiety, including variations like social anxiety and somewhat related conditions, like PTSD and OCD.

The very fact that CBD has been found to balance out THC’s side-effects, which happen to be anxiety and paranoia, speaks volumes.

CBD’s anxiolytic attributes can also help people fall asleep faster and adhere to a regular sleep-wake cycle, which we’ll talk more about in a second.

Pain relief is another staple of the CBD experience. Like sleep, pain can also be broken down into several major causes, one of them being inflammation.

While inflammation is part of our body’s (and the ECS’s) natural defence mechanism against certain harmful agents, like infections, it can spiral out of control and even grow into autoimmune diseases.

CBD has exhibited strong anti-inflammatory activity in various studies (be it predominantly on mice), calming the cytokine storms, which blister when cytokines – the body proinflammatory agents – go into overdrive instead of subsiding once their job is done. This is basically CBD in nutshell – restoring homeostasis, order, stability, which translates into universal pain relief.

CBD’s anti-inflammatory properties go a long way in conditions like arthritis, joint pain, muscle soreness, nerve and chronic pain, and respectively in helping those who suffer from them fall asleep.

CBD has displayed a very specific property that hits the bullseye when it comes to sleep improvement: increasing the stage of deep sleep, the realm where the deepest and most satisfying rest and recovery occur. Research also shows that CBD can improve sleep for people who suffer from PTSD, which often affects REM sleep.

Moreover, scientists have explored how CBD affects the sleep-wake cycle, which is a major concern regarding traditional sleep medications, and have found no negative impact, stating that “unlike widely used anxiolytic and antidepressant drugs such as benzodiazepines and SSRIs, the acute administration of an anxiolytic dose of CBD does not appear to interfere with the sleep cycle of healthy volunteers.”

One study focused on the direct effect CBD has on insomnia, as opposed to its indirect benefits for sleep, described above.

The study involved 409 participants, suffering from insomnia. To quantify CBD’s therapeutic effect, the participants had to rate their insomnia symptoms on a scale from 1 to 10, with 10 being the severest form.

At the start of the study, the average rating was 6.6., whereas at the end, it dropped to 2.2. – a threefold decrease.

The Most Efficient Ways to Use CBD to Fall Asleep

Going over CBD’s sweeping potential as a sleep aid is only the beginning. After all, even a magic wand isn’t of much use if you don’t know how to cast any spells.

The next question to cover is optimal product categories, starting with the first major distinction: full-spectrum CBD, broad-spectrum CBD, and CBD isolate.

These products’ contents span the full chemical spectrum of the hemp plant, including trace amounts of THC. The full spectrum works like an orchestra – like band members, the plethora of cannabinoids work in concert to produce a richer, synergetic impact, known in the cannabis field as the entourage effect, considered the X factor of cannabinoid magic.

The difference between full-spectrum and broad-spectrum is the complete lack of THC in the latter.

CBD isolate is pretty much what it sounds like – pure CBD concentrate, the purest money can buy (99%). For some, a solo performance by their favourite artist can be more powerful than a whole band.

The next product categories are characterized by their way of delivering CBD to the body. This is not a mere technicality – on the contrary, the delivery method affects CBD’s bioavailability – its absorption rate into the body – and time of onset, both major factors in its efficacy in fulfilling specific needs.

For the purposes of sleep aid, there are two product categories worth discussing – oils/tinctures and vapes. While CBD capsules and edibles are also a viable option, they offer lower bioavailability and a slower time of onset, while their main benefits – convenience and precision – don’t hold as much weight when it comes to sleep aid.

These are either oils or distilled alcohol, serving as CBD carriers. They’re usually applied either with a spray or a dropper, under the tongue, where they’re held for a minute before swallowed.

The area under the tongue is rich in capillaries, which soak up the oil and insert it directly into the bloodstream. This way, CBD bypasses the liver and its third-pass metabolism, which not only delays the onset, but also takes a serious cut, something like an entry fee, leaving much less CBD for you. In other words, oils and tinctures are one of the most cost- and time-effective ways to consume CBD.

So, if your sleep problems stem from anxiety or pain, take some CBD oil one to two hours before bed for optimal results.

Vaping produces the fastest onset – practically instant – but its bioavailability isn’t the greatest. CBD vapes are optimal for people who wake up in the middle of the night and need a quick little lullaby to go back to sleep.

Things to Remember When Choosing a CBD Sleep Product

N.B. Consult your doctor if you have any medical conditions that could be a variable in the equation. 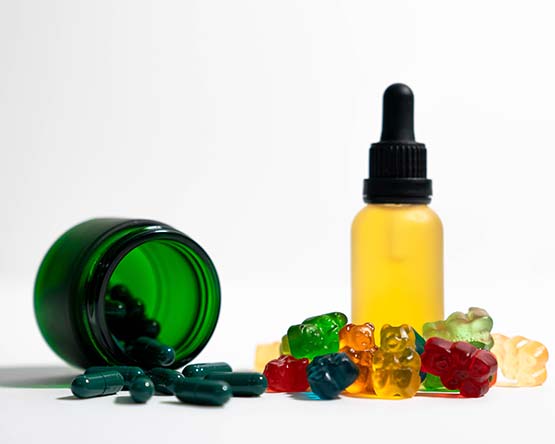 We understand it can be quite daunting when choosing your first CBD product so have a read of our handy guide to help you choose the product that’s right for your needs.

What is CBD?
One of the two central molecules in cannabis and hemp.
Is CBD intoxicating?
No. While CBD does have psychoactive effects in the sense that it can calm the mind and curb anxiety, unlike THC, it’s completely non-intoxicating.
What’s the difference between hemp and marijuana?
The THC and CBD contents, mainly. Hemp can’t legally contain more than 0.2% THC, otherwise, it qualifies as marijuana. Hemp is also usually bred to have higher CBD levels.
What’s THC?
The intoxicating molecule in cannabis.
Do mellow’s CBD products contain THC?
Only if they’re full-spectrum, but they never contain more than 0.2%.
What is CBD isolate?
A 99% pure CBD extract.
Is full-spectrum, broad-spectrum, or CBD isolate better for sleep products?
It really depends on personal needs and physiology. While full- and broad-spectrum tap into the entourage effect – the synergy between different cannabinoids of the cannabis and hemp plants, which is a case of the whole being greater than the sum of its parts – for some people, it’s pure CBD that does the trick, with no need for anything else. It’s a little like comparing cocktails and your favourite straight liquor. Between full-spectrum (up to 0.2% THC) and broad-spectrum (no THC), it comes down to whether you want to stay away from THC altogether or don’t mind a little.
Can a full-spectrum CBD product show up on a drug test?
Highly unlikely, but it depends on the amount consumed, anything over 0.2% THC can potentially equal a failed drug test.
What are the most common delivery methods for CBD sleep products?
Oils and vapes. Oils/tinctures work best if your problems sleeping are the result of a different condition like anxiety or pain. Take the oil between 1 and 2 hours before going to bed for optimal results. If your problem is strictly sleep-related, like waking up in the middle of the night, for instance, vaping is best because its effects are instant.
Are all CBD sleep products on mellow third-party tested?
Yes. No exceptions. This is one of the primary and non-bending rules for a brand to be featured on mellow. The third-party lab reports are available for viewing and download on our product pages.
How quickly will you receive your CBD sleep product on mellow?
We’ll dispatch your CBD product(s) within 1 business day. This means you should receive your parcel within 4-6 business days.